Benchrest Air Pistol - Some Thoughts and a Trial

Benchrest Air Pistol - Some Thoughts and a Trial

I spent today having a go on the target, and looking at how to actually rest the pistol.

I chose my Weihrauch HW40 for the trial, and used RWS R10 pellets.

I used the target previously posted. 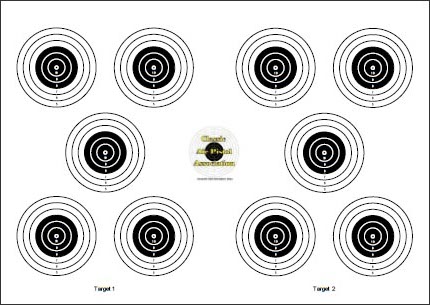 I thought the roundals might be too big at first, but at 6 yards the front sight blade of the HW40 is actually wider than the black portion of the target.

As such, I think it is correctly sized.

My initial thoughts on scoring is to use the honour system, with upwards scoring.

I have prepared some examples to make sure everybody understands my ramblings. 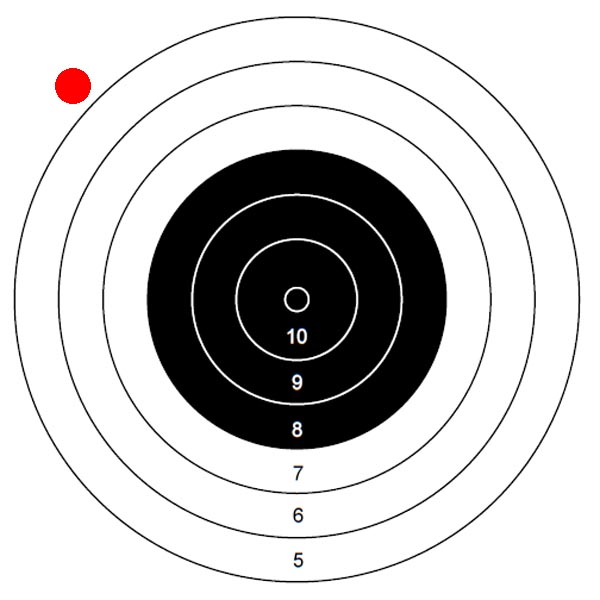 Needs no explaining, a miss is a miss. 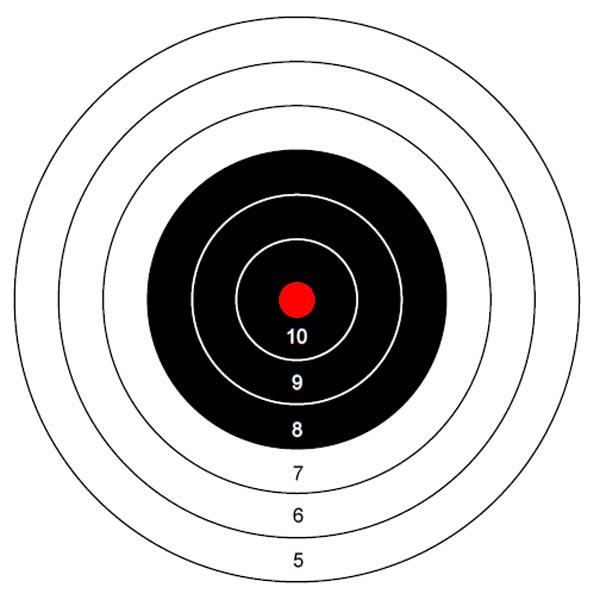 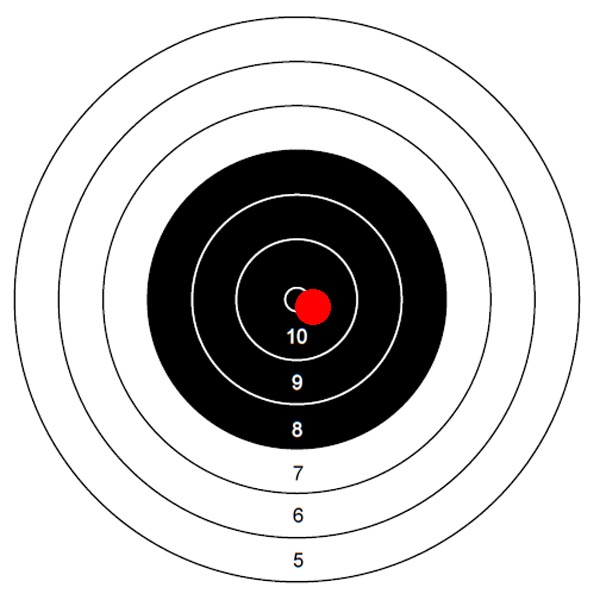 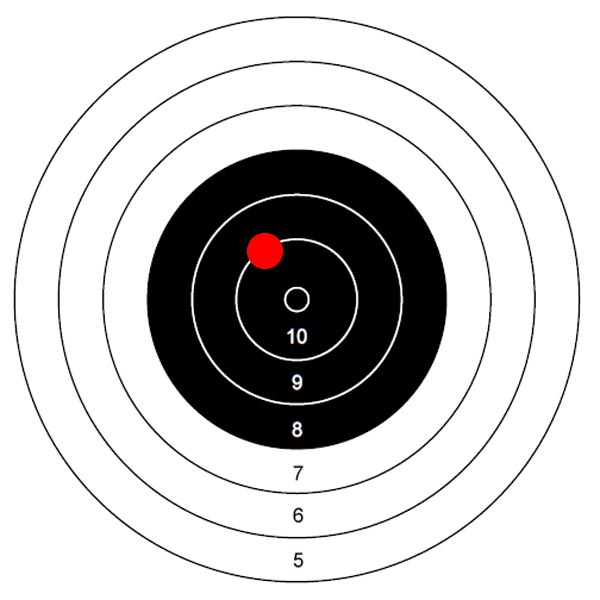 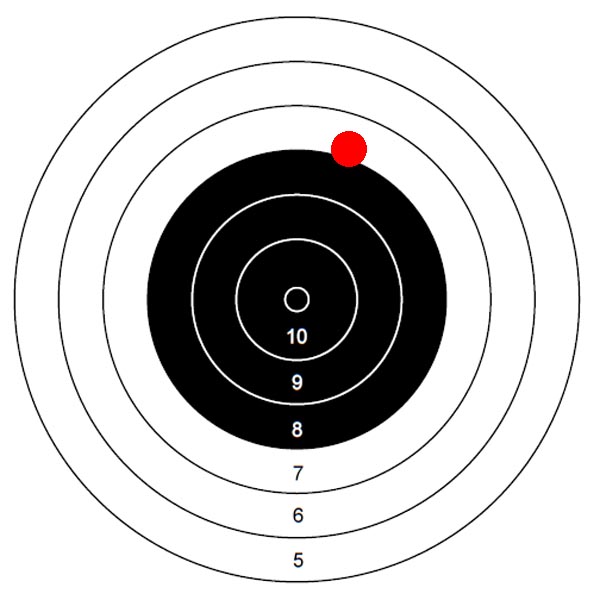 This is quite standard really.

I shot two targets, using the HW40 and my Fat Bag benchrest bag.

The first method was to hold the pistol one handed, then to rest the butt of the pistol and my forearm along the length of the bag.

I was sitting, but there is no reason why the shooter can't stand.

I found this very comfortable, with no strain on my person.

I did have quite few "wild" shots thought, scoring 72 out of a possible 105 (using the above mentioned 10.5 bonus method).

I then tried a second target, where I turned my bag sideways, again seated and one handed.

This time, however, I rested the pistol on the bag. The poitn of contact was between the end of the muzzle and the front of the trigger guard.

This time I scored 83 ouf a possible 105, and found this method much better.

As such, my suggestion is that the pistol may be supported at a single point between the muzzle and the front of the trigger guard.

The shooter may, if they choose, also rest their elbow on the shooting platform.

As I never actually completely obliterated the centre circle, we could say that any contact of the small centre circle would score the bonus 10.5

My highest scoring target is here:- 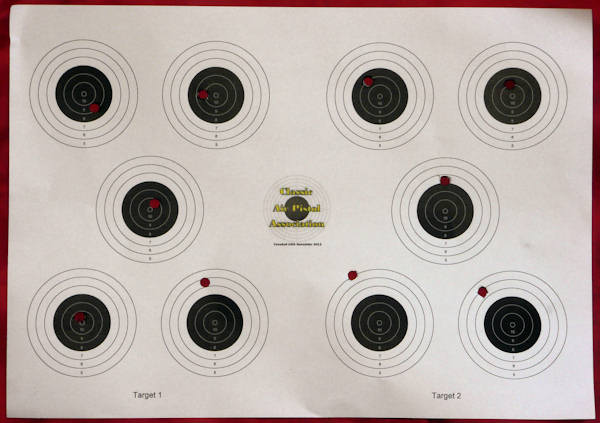 I photographed it on a red background to try and show up the pellet holes, but they haven't shown up too clearly on each roundal, so I have highlighted the hits:-

However, I do own an Intershoot Eagle Eye scoring gauge, which makes scoring a breeze.

These are a bit pricey, but well recommended.

Given the distance, and the point of  support, I am not sure whether there will be any advantages/disadvantages in choice of pistol, so I would say not to have seaparate categories at this stage.

The competition can always be tweaked in the future if one particular type of gun far out shoots another.

Whilst all this might sound a bit complicated, I think it can be summed up quite simply:-

1 - Shooter may stand or be seated.

2 - The pistol must be shot one handed.

3 - There can only be one point of contact between the pistol and the chosen support. This can be anywhere between the muzzle and the front of the trigger guard.

4 - The shooter may, if they choose, rest their shooting arm elbow on the support platfrom.

6 - Any roundal with more than one hit automatically scores zero.

And that, I think, is all the rules that are needed.

I note you specified the pistol & pellets used which is great, might it not be good if all shooters are required to provide that info so that performance of guns n pellets  can be compared as well as how the shooters do week by week, looking good ,M.
S.G.S Duo 300,Etc, G0JVB ex G6MUI.
Top

Yes, I was thinking the very same.

hen everybody is happy with the competition, I'll add some scoring boxes, and information requests directly to the target.

Not sure why some went out the black by so much.

I just ordered the MTM front rest so we have a couple of different ones for comparison. 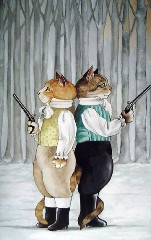 I like the alternative scoring option. You could still have 0.5 for a total bull out if you use 0.1 for a standard centre circle break.

Looking good though  :)
>>>This space has been reserved for a witty signature<<<
Top

Oooh,  excellent point there,  and a good idea.

This should be enough to make a difference if the group sizes tightened.

zunmik:470 wrote:.......and if you use a recoiling pistol you might find it better to support the wrist or you will shoot high.....M.

Having not tried pistol benchrest shooting I cannot confirm this but it is something I have heard before.

Rule 3 may exclude springers if the accuracy is affected by this type of support. Can springer shooters support their wrists instead?

3 - There can only be one point of contact between the pistol and the chosen support. This can be anywhere between the muzzle and the front of the trigger guard.
>>>This space has been reserved for a witty signature<<<
Top

I think the rule should stand with regards the contact point of the gun and the rest, hand it bring one handed only.

However, I suppose what ever the shooter does with the rest of the supporting arm is up to him/her.

Just need to put this into a simple sentence.

Perhaps: the shooting arm my be held with the none shooting arm, as long as contact is no further forward than the wrist.

I am also wondering if the bonus should not count for .22 as the larger calibre might make scoring this easier. Any thoughts on this?

Of course, we should be using classic guns for this, so wool have to come up with a suitable definition.

pmh:486 wrote:
I am also wondering if the bonus should not count for .22 as the larger calibre might make scoring this easier. Any thoughts on this?

Sounds like a good idea to me Phil
Top

pmh:486 wrote: Of course, we should be using classic guns for this, so wool have to come up with a suitable definition.

Ah, now thats the tricky one!

I guess its down to defining this by some kind of arbitrary cut off date re year of manufacture and/or design parameters.

Must be a pellet firer

This would exclude the modern disposable plastic guns but allow something like a Benjamin EB which although still in production - has been so for decades virtually unchanged. Slightly more contentious would be some of Umarex models - for example I would regard the CP88 (air pistol version of a Walther P88 cartridge pistol) as a classic - others might not!

Yes,  I think it is going to be a tricky one.

I thought about age, but guns like the HW70 started in the 70s and are still made today.

One rule I would suggest is:-

All pistols must be pellet firing and single shot only.

This should take care of the mass produced clones.

I'll try and pull some suggested rules together for comment.

pmh:490 wrote:
All pistols must be pellet firing and single shot only.

This should take care of the mass produced clones.

Yes, I should have added "modern" in that statement as there are, indeed, classic repeaters.

pmh:492 wrote:Yes, I should have added "modern" in that statement as there are, indeed, classic repeaters.

Maxthon style by Culprit. Updated for phpBB3.2 by Ian Bradley